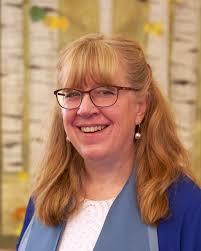 The Rev. Elizabeth Sollie is our interim minister.  She was born in Fort Collins, CO where her parents met at the College Unitarian group.  In High School, her minister was the Rev. Walter Royal Jones—one of the bright lights of our denomination. After college, Elizabeth lived with her family all over the west in communities too small for a Fellowship, let alone a minister. In 1996 the family moved to Gunnison, CO—in part because they had a UU Fellowship of about 10 intrepid souls. Later, Elizabeth and her two sons moved to Denver and started attending an actual brick and mortar church with a minister—it was very exciting! First Unitarian Society of Denver has a long history of social justice work and was a wonderful fit.

As Elizabeth’s children left the nest, she became more and more involved in church in many capacities including serving on the board as a member-at-large, vice-president and then president.  Her time on the board spanned both a year of terrible controversy and then a year of discernment for the congregation as they made the decision to become a sanctuary church.  It was a wonderful education.  From there she went to the Unitarian Universalist seminary, Meadville Lombard. The school philosophy is that it is easier to act ourselves into to new ways of thinking than to think ourselves into new ways of acting.  Three years of intense ministerial formation taught Elizabeth a deep appreciation for spiritual formation-- work she encourages all Unitarian Universalists to engage in.  Seminary was followed by a year of Chaplain Residency at the University of Colorado hospital—an experience that demands religious clarity in the face of deep suffering. Elizabeth now serves as our interim minister and hopes to encourage that same clarity for our congregation as they explore where they have been, examine where they are now and discern who they want to be going forward.
Music Leadership Team

Elicia Faul, Andrew Larrivee, and Owen Piehl are three talented and much-loved, local singer-songwriters who share Music Leadership at the UU. Elicia serves as the Team Lead, with Andrew and Owen providing leadership on periodic Sundays. 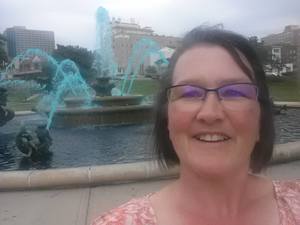 Marcy Ost grew up in western North Dakota, spent some time in Jamestown and now she and her family live in Mandan where they share a house with her parents, three dogs, two cats, and a guppy!
Marcy is a graduate of Dickinson State University with a degree in writing and minors in journalism and English. She’s spent her professional career as an assistant in various shapes and forms and is thrilled to be of assistance to the UU!
Bookkeeper 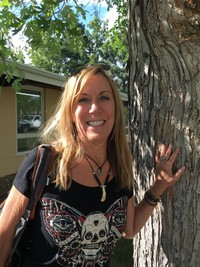 Robyn Myers recently moved to Bismarck and is thrilled to be a part of our congregation. She served as a corporate accountant in previous years and enjoys taking on non-profit accounting.

She is an agility dog trainer, singer, and mother of two.